Considered by many to be the most exciting salmon to catch, the Coho Salmon is an exciting and vibrant fighter that will often come to the surface to jump and give a good show. We catch the Coho’s beginning in July, but the peak season is definitely August and September. While the early season Coho’s may only average 5-8 pounds, by September we will see fish in the 10-15 pound range with a few weighing in even higher. What keeps people coming back in August and September for the Coho’s is not just their size, but also their quantity. These fish will come into the waters around Ketchikan in such large schools that it becomes hard to keep any bait in the water at all. I have had days fishing in August and early September where we have had 4 and sometimes 5 cohos on at the same time!

The Fighting Characteristics of the Coho Salmon

Coho’s are known for their lightning fast runs and the incredible jumps that they do after they are hooked. The fight that a silver will give you is so good, and the meat so delicious that some of the local Ketchikan residents will not go salmon fishing at all, except for fishing the fall Coho run! Where a King Salmon will often dive deep and take the fight to the bottom, a Coho will often stay near the top of the water column and fight you by making fast runs first at the boat, and then directly away from the boat. One of the reasons these fish are so highly prized for their fighting ability is the “acrobatics” they can do. Some silvers will jump over and over again between runs at the boat, forcing the angler to either reel as quickly as the fish is swimming or risk losing the fish all together. 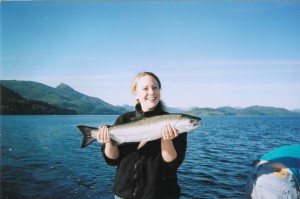 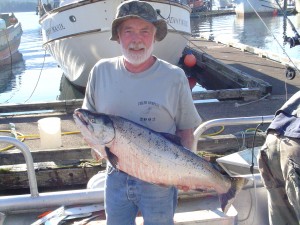 A Proud Fishermen with a August Silver

Are you ready to come salmon fishing in Ketchikan Alaska for silvers with Captain Jim? Contact us now to book your trip!

I just had to share this awesome picture my Uncle took while commercial fishing near Ketchikan, it is a Ling Cod that latched onto a Coho as they were bringing it in! 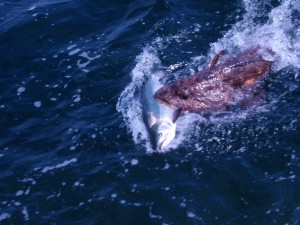